Today I will talk about game modes and what we want to achieve with some of the upcoming changes to Battlerite.

So far Battlerite has always revolved around Arena – 2v2 and 3v3, ranked and unranked. We’ve been trying out some brawls over the year – some more for fun than others – for experimenting with new mechanics and ideas.

First, let’s talk about Arena and the split between 2v2 and 3v3. People have been asking for a long time what the primary mode for Battlerite is. What mode is the game balanced for and what mode will be the future of Battlerite?

2v2 is by far the most popular mode and has always been. Even when queue times were super quick during our big patches people still preferred to play primarily 2v2. There are a number of reasons to this, the obvious one would be that it’s easier to find a match and join in with a friend.

The more in-depth reason that we’ve identified is that 2v2 is just simpler – to understand and to play. Most players feel that they have more control of the outcome, that they can more easily see and understand what went right and what went wrong.

It’s a long, long time until players are ready for the more action-filled 3v3 mode. There are a huge number of abilities and actions occurring in a very short period of time and handling all that information is difficult. Also take into account the number of champions in Battlerite and how players need to learn how to play their champion vs all other champions.

People learn quicker in a more controlled environment, which is one of the main reasons many players prefer 2v2.

For those who played Bloodline Champions back in the day you know that we had very similar player behaviors and similar numbers. We always spoke of 3v3 as the main game mode, the mode we balanced the game for, and the incentive to play 3v3 was always bigger, but we still had more players in 2v2 (until it was disabled).

Likewise, 3v3 is the more competitive mode in Battlerite. It has a better balance overall in terms of champion compositions and in win/loss chances across the board. It’s the mode that the community is hosting the most tournaments in and it’s the mode that is most fun to watch (for players that are into Battlerite at least). 3v3 has deeper strategies and a higher skill-cap.

Our plan is to continue to support both game modes and not declare a “primary mode.” For us 2v2 is a great mode for learning how to play Battlerite, an accessible mode in a still very competitive environment. It’s an environment that might not always be as fair as 3v3, but still a highly competitive one that will take countless hours to master.

3v3 is our eSport mode. It will be the most balanced mode, the mode that will be hosted the most in tournaments. That said we’re not excluding a competitive scene for 2v2, but we know for a fact that the community prefers 3v3 when it comes to eSports. If this changes over time we will have to change with it.

Something else we tried recently was the 1v1 brawl. The controlled environment of 1v1 coupled with random champion was a well received formula and allowed player to quickly learn and pick up some new champions and skills. 1v1 is a mode that we will most likely be experimenting with more in the future!

But enough with the old stuff, what about the NEW stuff?

What is this new game mode and where does it fit in?

We call the new game mode Battlegrounds. It’s an objective-oriented game mode that utilizes many different elements that we’ve been working on over the year. We hope to fill a void in Battlerite with a mode that is less punishing and easier to jump into for quick bursts of fun. A mode where you can learn new champions and boost your skills in a friendly (yet still competitive) environment.

In short, Battlegrounds is a 3v3 mode split into two phases. An “event” phase where players fight to secure or complete objectives that will lead into an “assault/defend” phase where one team is attacking and one team is defending (depending on the outcome of the event phase). The victory condition is to defeat the enemy Guardian. 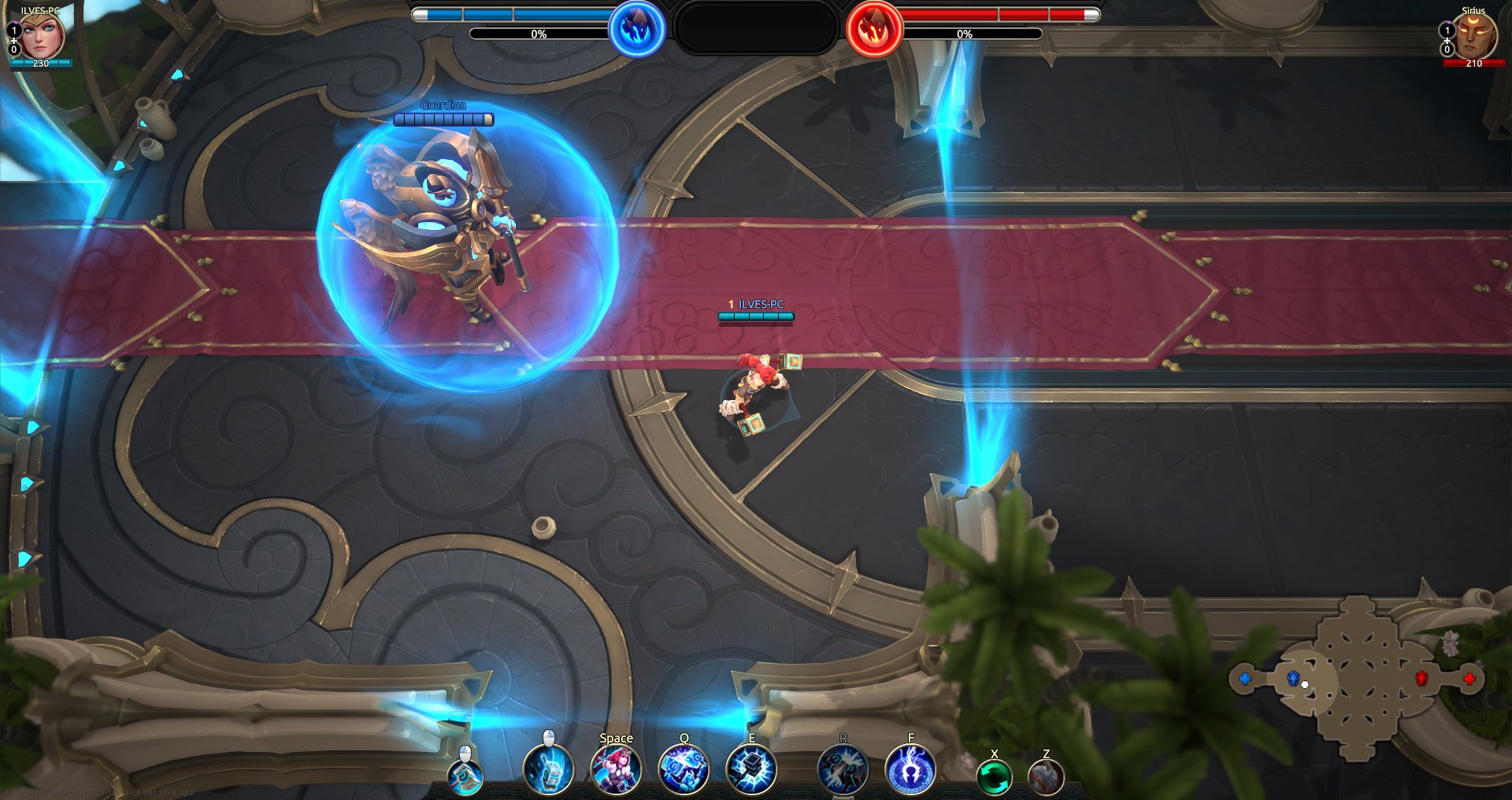 What we’ve tried to achieve with this mode is something that isn’t too far off from Arena yet very different. The mode starts out similar to Arena and there are no changes to core-mechanics such as abilities or changes to core stats such as max health or movement speed. 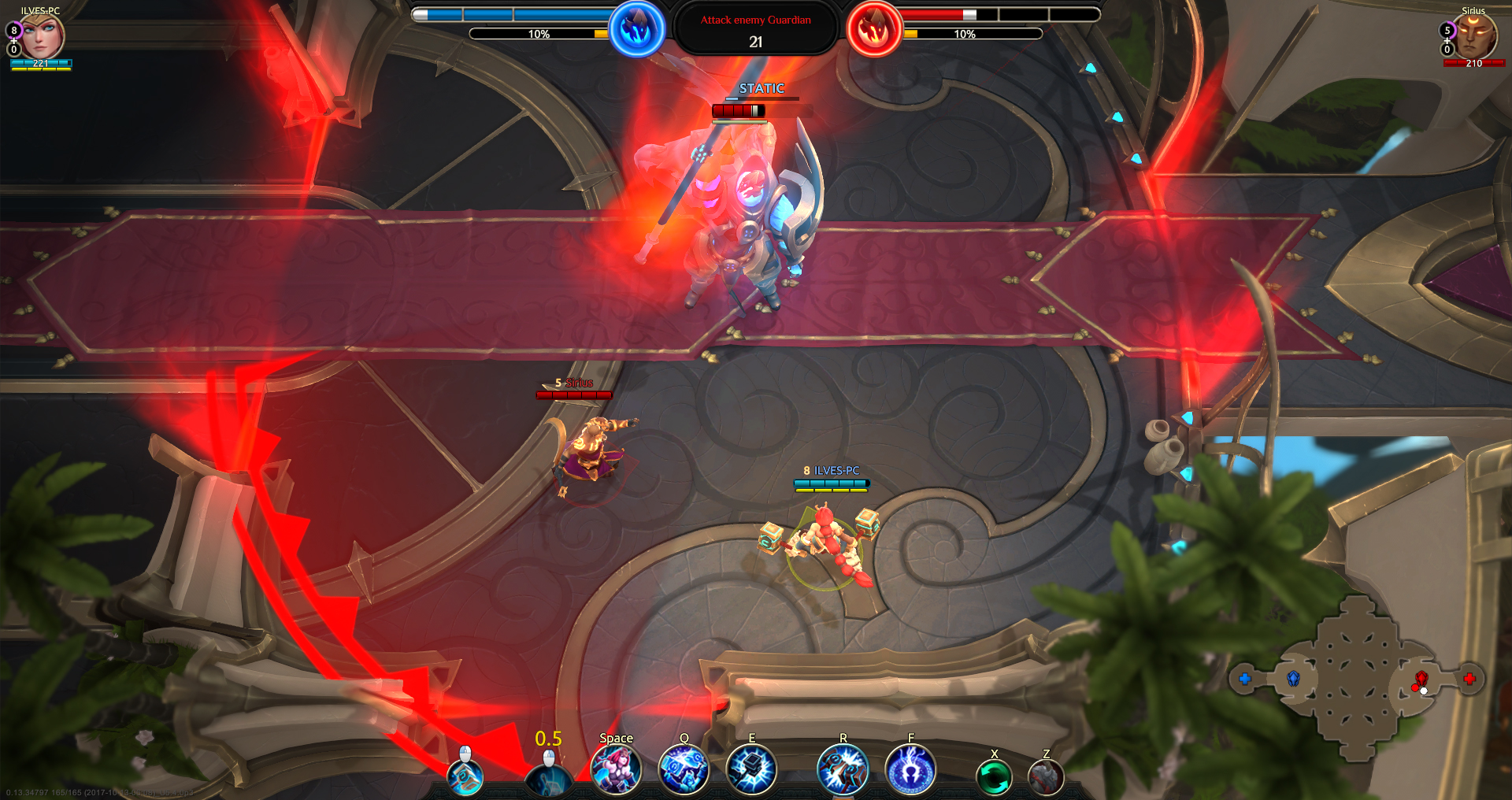 There are however a number of new mechanics as well as some refined mechanics previously used in brawls such as: 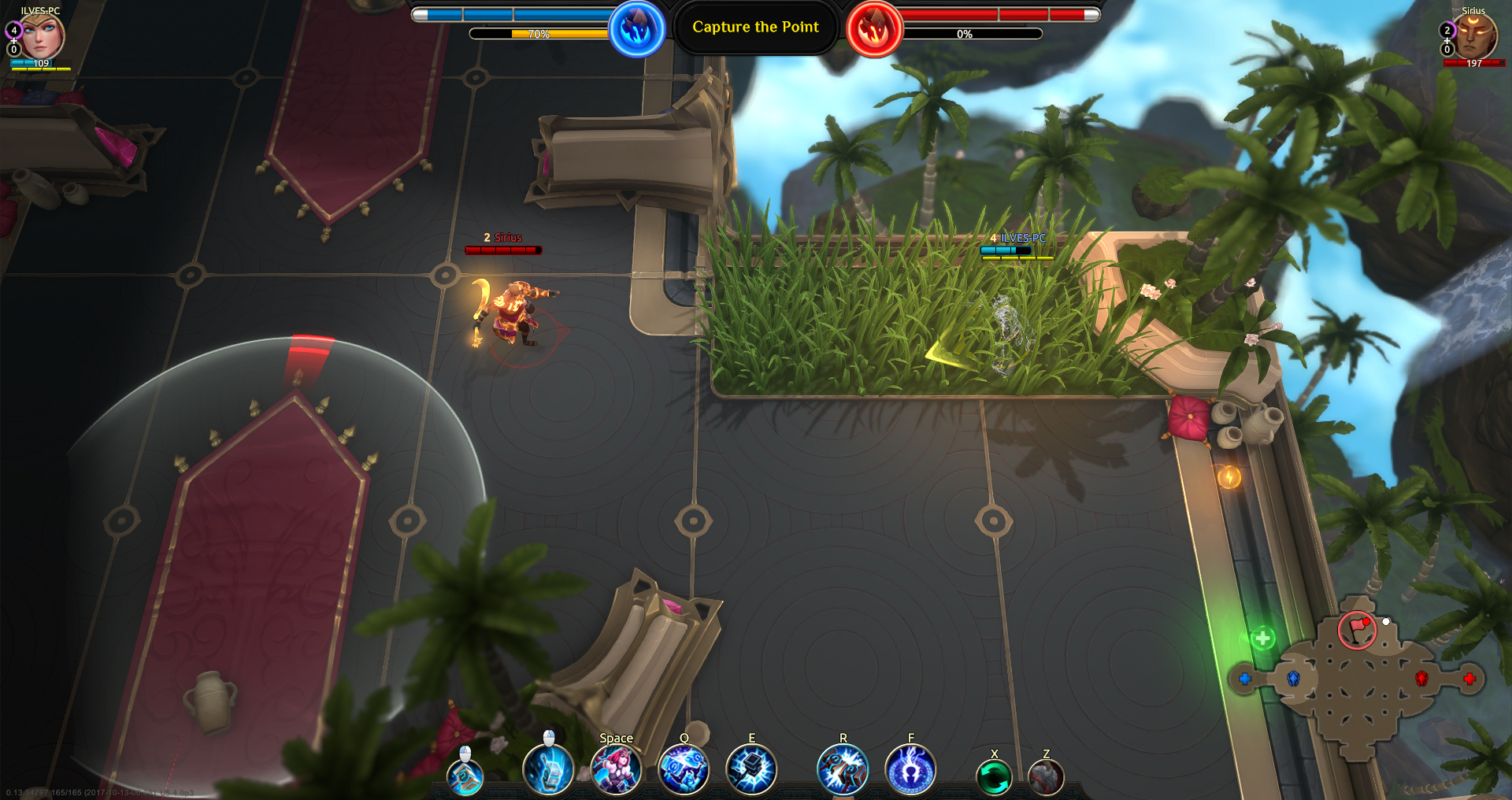 I’m not going to go more into details regarding Battlegrounds today (it does not play as a MOBA, I assure you). You will get to play it yourself soon! 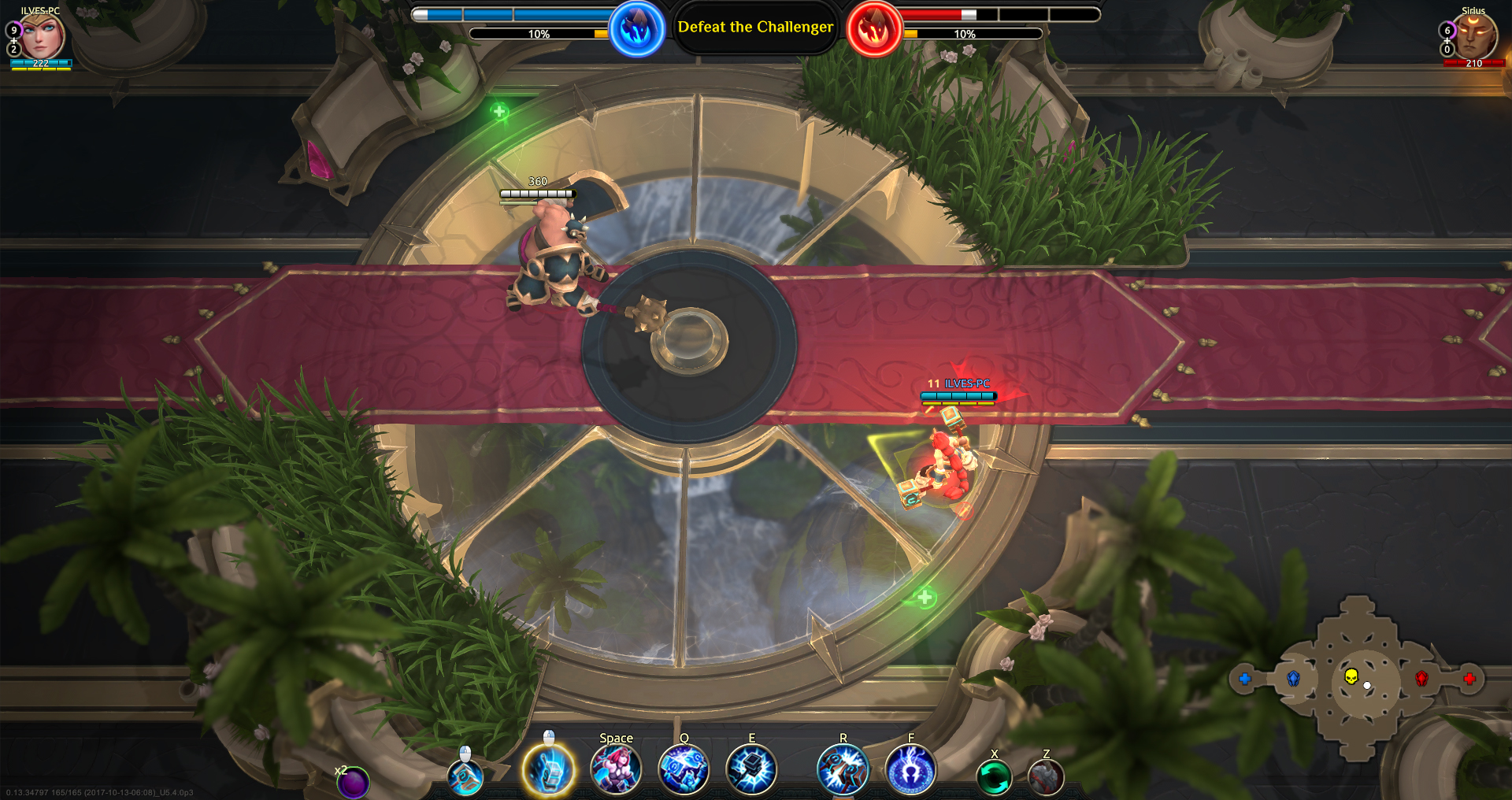 But what about the matchmaking queue?

We plan to do some changes to matchmaking queues and we would love to hear your feedback as this is subject to change. When Battlegrounds is released we plan to remove the Casual queue for Arena (2v2 and 3v3). Arena will always be played as a Ranked mode when using the matchmaking system while Battlegrounds will be an unranked mode. You will still be able to practice Arena in vs AI or setup your own games via Private Match. 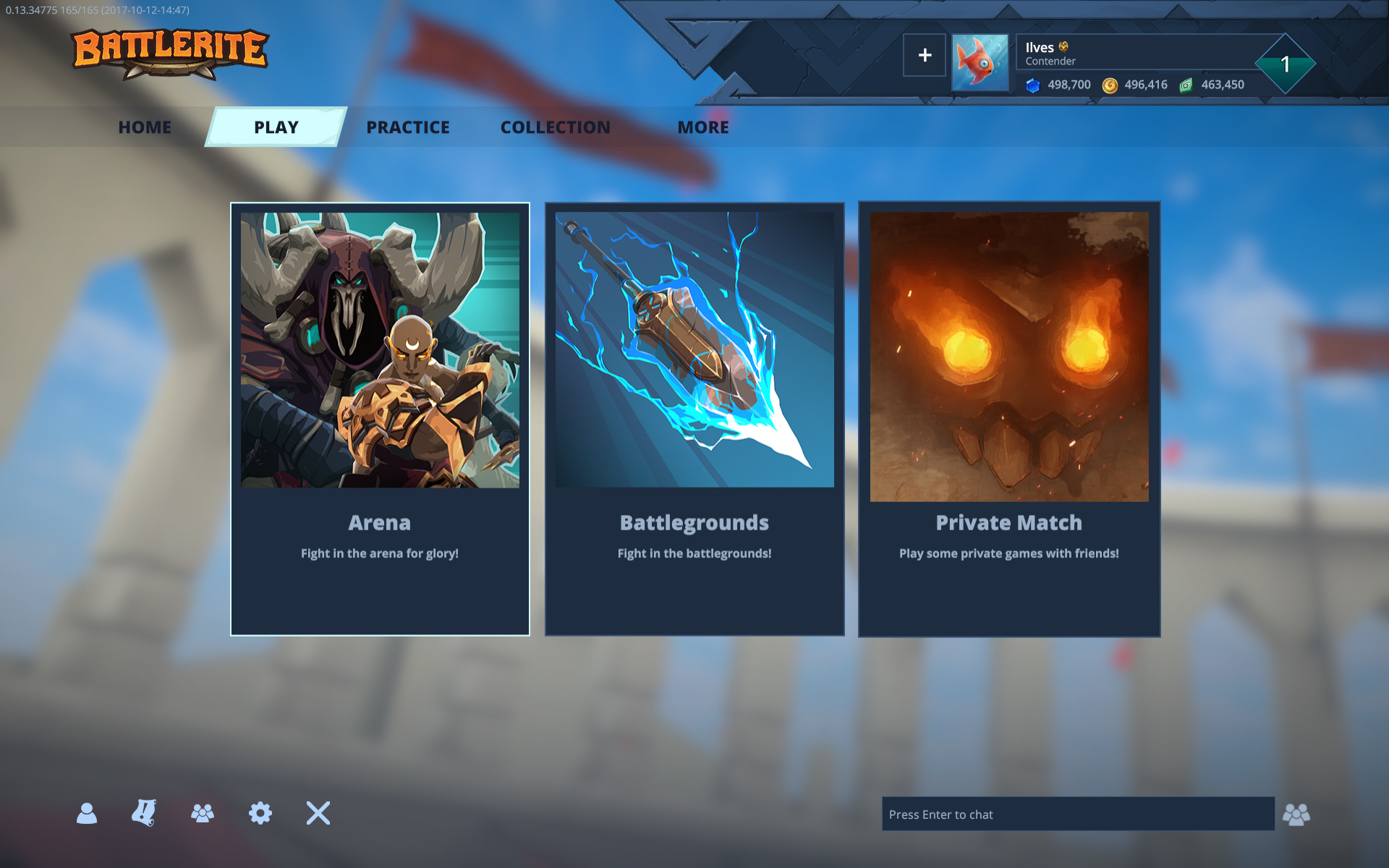 We make these changes to improve match balance across the board, four different queues for Arena is a bit too much with a new mode in place as well. As we don’t know the impact of the mode until it’s launched it’s hard to estimate how popular it will become, therefore we will keep a close eye on the different queues and change things up if needed.

Hope you enjoyed the read.

Until next time,
Ilves, Game Director