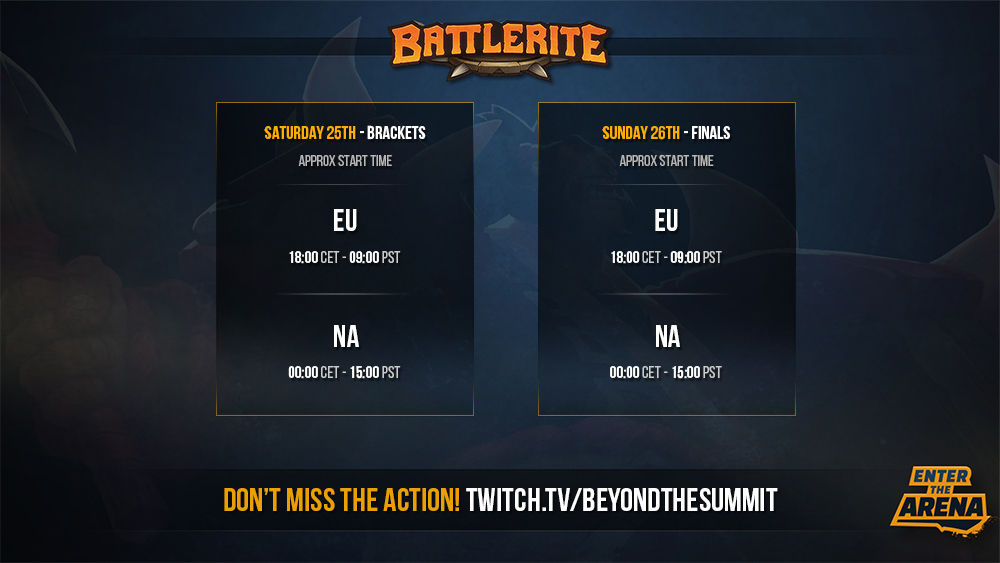 The wait is finally over!

To kick off the 2017 competitive season in style, Battlerite is pulling out the big guns as it partners with Beyond the Summit and Twitch to bring you “Enter the Arena”.

The event starts at approx 18:00 CET / 09:00 PST this Saturday and Sunday over at Beyond the Summit on Twitch.tv.

This weekend sixteen of the best teams from North America and Europe will collide in an epic showdown with lots at stake. Not just the record setting purse of 10,000 USD hangs in the balance, but also honor and regional bragging rights. Who will make it through? Who will collapse under pressure? And will the top seeds from the invitational process in TelroskMi and Onslaught live up to the billing?

Only the unforgiving grounds of the Battlerite arena can give those answers, as four invited teams and four qualified teams per region embark on the journey to the battlegrounds. While in Europe a clear-cut favorite might not be determined, though TelroskMi is a frontrunner, the favorite across the pond is clearly Onslaught.

The team around Averse, Arakune, and Ninjas has been one of the most dominant forces in the competitive Battlerite scene since its inception. Gunning for the king of the land though is the team Identity Crisis, who won’t back down from the challenge. When asked about the Onslaught dominance, InTheFlesh praised his team’s diversity when it came to hero picks, saying: “We have strong pocket picks that many teams lack.” Will they be able to catch Onslaught off-guard with one of those special tactics?

Not just Identity Crisis is priding themselves on a diverse pool of strategy though, as Excel Wizards had similar fighting words. When asked about the competition in the North American region, Finlev of Excel Wizards pointed at the versatility of the individual players in his team. “I would say that our team is more flexible in regards to comps than any other qualified team. Every one of our members are proven multiclassers and aren’t afraid to switch it up to get an advantage.” With the dominance of Onslaught hanging over the region, teams seemingly try to go with out-of-the-box solutions to break the strong hold of Onslaught. The old saying goes “If you come for the king, you best not miss” – true in the sense that once pocket strategies and secret techs are revealed, they are out in the open. Use the surprise factor or the opponent will adapt.

Behind those three big favorites, the second row of teams has room for some innovative and exciting games as well. Overall the pool might not be as deep as the European group stage, but teams like Triumverate are definitely not to be underestimated. Triumverate crushed their qualifier with a 10-3 scoreline overall. They are a dangerous team when they can mount momentum once again. With MrPink as the Twitch star and Damocles and TheExpanic as Top 5 players in the world on respective heroes, they got plenty of arguments to go for them. As a matter of fact, it was Damocles on Ashka that set the highest damage record in the qualifier with 1146 against FireBlaze. Only downside to them, the luck of the draw seeded them into Group 1, also known as the group with Onslaught and Excel Wizards. If they would make it out of this, a statement would have been made – loud and clear. Can they compete enough for that upset?

Another big thing to keep an eye out on in Group 2 would be the search for a rival to Identity Crisis. Scylla as the invited team might be in prime position, but their experience in the competitive scene is the big question. As one of the newest teams in the Battlerite scene, this tournament will be one of the first chances to proof themselves. Behind that, the two qualifier teams of the group are Impervious and Poloma Mains – both with strengths and weaknesses going into this event. The gang around Tahurtz, Trinith and Exploitz run the roving fortress playstyle to great effect in the North American region, backed up by two of the best individual players on a given hero. For Tahurtz it is Varesh, for Trinth its Poloma.

For Poloma Mains the hope primarily comes with TrinityInfinity and his Iva, as he is the top rated NA player on that champion. Keywi and his Oldur are still Top 3, but they need to have a standout performance and rise above their normal level in order to seriously challenge the opposition in this group. Can anyone upset Identity Crisis or will the race only be for the runner-up spot in the group?

In Europe, the more defensive and maybe more calculating region, the top seed is still up for grabs. The region is void of a big successful juggernaut like Onslaught, making it tougher to predict, but way more exciting to watch. The top seed of the invitation pool went to TelroskMi, a team that has been around in the upper echelon of the Battlerite scene for a long time. Their way of playing the game is methodical and relies on familiarity and coordination, which makes up for the lack of diversity in their hero pool. As a matter of fact the majority of their competitive matches is fought with Croak, Jade, and Lucie. In sharp contrast to North America and them bragging about diversity of ideas and hero pool, TelroskMi seems to stick to the mentality of “Never change a winning team.” When asked about it, Teldo had a very simple explanation to offer: “We focus primarily on one comp since we started playing, because we believe it’s better to master a specific playstyle and focus on improving our communications and synergy for now. Luckily the comp that we chose has a lot of room for teamplay, since we have the ability to chain a ton of CCs together into big burst combos.” Time will tell if it remains a winning team or if the composition will run into the counters and fall to predictability.

The front-runner to take down TelroskMi are Fortress with Haste (Previously MyCon – Prepare to Die), as they’ve looked very strong in recent times. They are the first in line to exploit the predictability of TelroskMi, even though they are dealing with some hero pool issues too. Their staple pick Taya has received changes in the last weeks and might not be the superior go-to weapon for the team anymore.

The race for the top spot in Europe is fascinating for sure, but even the second row of teams presents plenty of great storylines and potentials for upsets. Without Origins sticks out of that group, as they might be the darkhorse in the entire tournament. Familiarity and cohesiveness might be an issue, as they’ve just recently formed and haven’t gotten a lot of practice reps under their belt, but experience and skill are definitely there. The team consists of some of the best players in Battlerite and has a very high ceiling with Kensu, UnclePaul and Gazhag. The qualifier alone proved that point, as they’ve just cruised over the competition. Of course the competition will kick up a notch now that we are in the main event of “Enter the Arena”, but Without Origins has great potential to make it out of groups as a qualifier team.

Two other competing teams to keep an eye out for are U Choose 3v3 and Intolerant. Both teams have a similar passion to elevate forgotten champions into stars. For U Choose 3v3 it is Pearl and Ashka, two champions that rarely see play in the competitive circuit, while the whole mentality of Intolerant is to pick niche characters. Team member Nyy on that tactic: “We generally play niche characters and try to make them work.” What “make them work” usually means is combat, all-out aggression, relentless action and pursuit of kills. While the entire European region might play the game a bit more cautious than their North American brethren, Intolerant is not subscribing to that way. They will come at you and they will come at you hard. Will they run straight into their demise or will their style catch the cautious Europeans off-guard – like it did in the most recent Battlerekt cup?

Guiding you through the entire show will be a quartet of esports knowledge and casting experience, spearheaded by the former main caster of Heroes of Newerth, BreakyCPK. When asked about this gig he was enthusiastic to say the least: “I am really excited for this opportunity to cast the first official Battlerite tournament, which I am sure is going to be one of many to come.  While preparing for the event, one of the biggest things that stood out to me was the diversity of lineups from team to team.  We could see a lot of different things this weekend, but no doubt there will be plenty of action!” Alongside Breaky, three other casters will give their voice to the arena. FindableCarpet of Rocket League fame, streamer and content creator Rainy, and rising Battlerite star TJ will take over the mic and bring the action to you at home.

So sit back, turn on twitch.tv/beyondthesummit this Saturday and Sunday and enjoy the non-stop action and intense clashes of Battlerite. They will all “Enter the Arena”, but only the strongest and best team exit it with their head held high and their arm raised in victory.