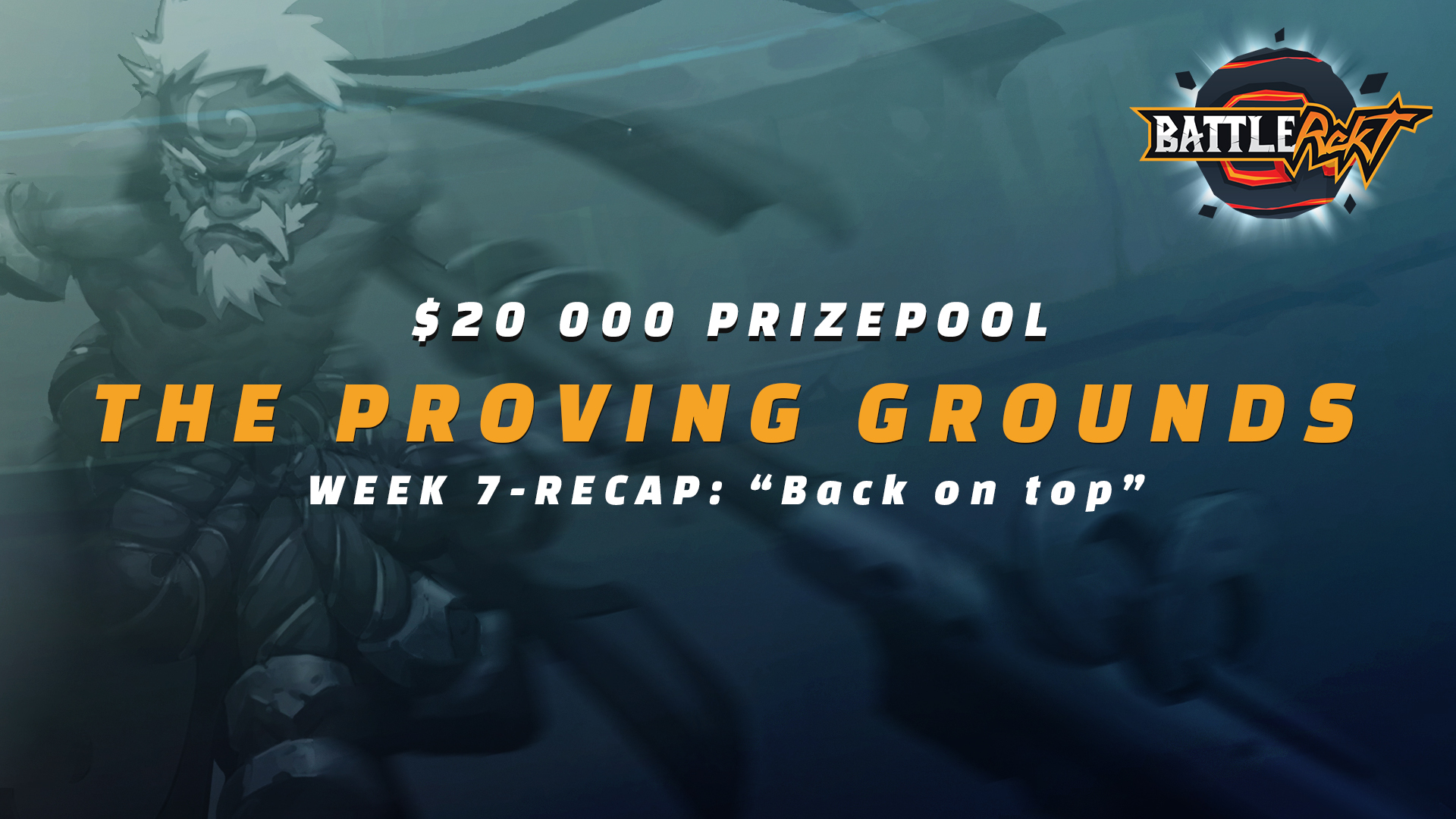 Battlerekt Week 7 was ahead us with plenty of buzz and intrigue. Last week, after three weeks on top, Intolerant was pushed off of their European throne and replaced by Functional Sociopaths. Meanwhile, North America saw rosters change but the dominance of Onslaught remained. How would it all resolve? Could Intolerant battle back? Is Onslaught getting new challengers?

Last week they were defeated in the Semis, this week they got their revenge in the Grand Finals. Intolerant with Joltz, Nyy, and KlernY responded to the new challenge of Functional Sociopaths in impressive fashion – tearing through the tournament. The Thursday events started with a statement win over Project Horizon in the Semis. Project Horizon, who had not been in the Top 4 for three weeks, had their coming back party cut short by an Intolerant team that seemed to outclass them at every step of the way. Not even a Triple Ultimate by Ashka could put a dent in the armor of Intolerant. A 5-0 and 5-2 win got them comfortably into the Grand Finals once again – playing as patient and as controlling as ever.

Their opponent in said Grand Finals was Functional Sociopaths. After their unexpected rise all the way to the top last week, they had to back it up. In combat sports the saying goes: “you are not the real champ until you defend your title” – and that was on the line for Functional Sociopaths. In their rematch with Daebak, they crushed. Similar to Intolerant in the match before, the Sociopaths left little to no doubt that they came to play. An aggressive game by both teams saw Sociopaths with their Shifu doing more damage to the backlines than Daebak’s Raigon could inflict. Even a switch back to the trademark Taya of K3b4b1 came too late for Daebak to turn back the tide as they fell 0-5 and 1-5 to the defending champions.

The stage was set for the big clash. The reigning and defending champs of Functional Sociopaths against the four-time European champs of Intolerant. Who would prevail and how close would it be? The answer to that came quick with Intolerant firing on all cylinders. If Functional Sociopaths couldn’t tip the rounds in their favor early with a big Bakko play or something, Intolerant slowly but surely seized control – inch by inch. Nyy and Verosk were engaging in several 1v1 battles on Iva, most going in Nyy’s favor, while their other teammates were slugging it out. Another key to success was the patience by KlernY once again. Throughout the successful stint of Intolerant as the top dog in Europe his Lucie play has been marked by the virtue of sitting back and waiting for the perfect moment to strike. No other Lucie waits out the opponent’s Lucie Goo as much as KlernY, punishing that move instantly. In the 14 rounds between Intolerant and Functional Sociopaths, KlernY showcased that patience at least seven times, ending the life of randler in the process. Last but not least, the map dominance was reversed again. Last week the big takeaway was Functional Sociopath’s ability to control the real estate of the arena. Against both Daebak and Intolerant they were in complete control of the middle orb last week, but this week Intolerant pounced back and utilized the middle of the map more. All those factors added up to a spectacular return of Intolerant to the European throne. Make no mistake though, Daebak and Functional Sociopaths are in striking distance to them, making the European region as exciting as it has been throughout The Proving Grounds. 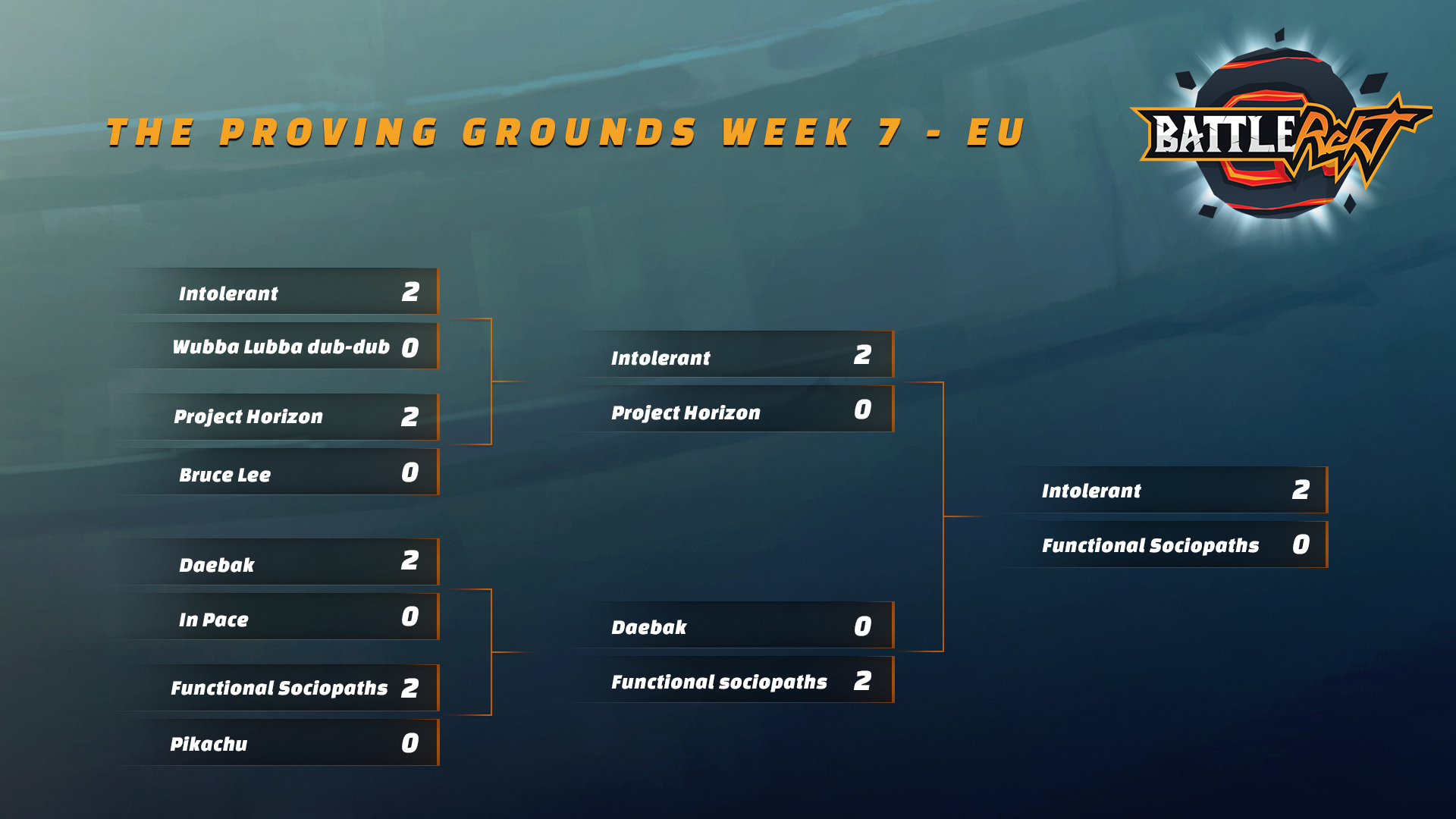 Curb your Enthusiasm, despite the name change of Onslaught to Legendary the amount of Barney Stinson references will be low. Instead, it’s much more intriguing to focus on a new rivalry that might shape the American region for the next few weeks. While Legendary, formerly known as Onslaught, was always on top in North America, their early rival Excel Wizards was kept out of the Grand Finals on numerous occasions. Now they’ve made some changes and returned to their old glory reminiscent of the first week and Enter the Arena. With ProsteR in for Finlev they seemingly added an incarnation of Harry Houdini, a player that got out of sticky situations like no one else.

ProsteR escaping with a sliver of HP left was the story of the game throughout the tournament. The entire Semifinals story between Deadly Insplosion and Excel Wizards was around the survivability of ProsteR on Taya. Numerous times he cheated death, escaped, and bought his team enough time to punish their opponents. Deadly Insplosion fell to this in the Semifinals with a score of 1-5 and 3-5, going out in the Semifinals for the first time in since Week 1 of the Battlerekt festivities. Until then they had dominated the Semifinals, especially in the head-to-head with Excel Wizards. Now, at least for this week, the momentum had shifted and Excel Wizards reached the Grand Finals – adding more spice to the rivalry of DI and Excel in the process.

Another minor rivalry that is emerging in North America is the one between RMS and Unsung. For the third straight week the two teams had faced each other in the Quarterfinals of the Battlerekt competition, slugging it out for a spot in the televised portion of the tournament. After Week 7 the head-to-head goes to InTheFlesh and his RMS team, who eliminated Unsung for the second time in three weeks. Sadly, their reward was a date with Legendary in the Semifinals, which ended in a 0-10 destruction. Not only did RMS not put a single round win on the board, but they were also only able to slain two members of Legendary in ten rounds of Battlerite.

So it was Excel Wizards and Legendary in the Grand Finals, and several stuck out right away. For one, Legendary returned with ReapWhatUSow back in the lineup and brought the heat. After trying out a double support strategy with stro in the mix, Reap back in meant Shifu back in, which meant pain in the backlines back in. The second observation was Excel Wizards deviating from their strategy against Legendary. Throughout the last meetings, and the last games in this tournament for that matter, their support hero of choice would be Pearl. No matter when they faced Legendary in the past three weeks, they would always trust in Pearl to get the job done. This time they went with a curveball – a green, goo’y curveball in Lucie.

What followed was described best by Geeks in the broadcasting booth: “Digital athletics at it’s finest” – now the essence is right, the choice of words might now be, but that is besides the point. Legendary and Excel Wizards delivered the best game of any Thursday night of Battlerite action. An all-out brawl between the teams with incredibly close rounds, every member being at low HP constantly, plenty of dodging, kiting, juking, and jiving. Legendary came back with their aggression and Excel Wizards was not afraid to fight fire with fire. Especially Round 9 of Game 2 will be remembered throughout this Battlerekt season at least, as it saw a Excel Wizards come back with five champions on the verge of death. Excel Wizards clutched it out, forced a Game 3 and yet couldn’t walk away with the title. Legendary once again got it done – in a nailbiter for the second time this season.

It is certainly too early to make grand proclamations about Excel Wizards and Legendary, but numbers and history don’t lie. In Week 4 Deadly Insplosion pushed Legendary to a three game series, now in Week 7 it is Excel Wizards. Teams clawing their way into the vicinity of Legendary’s greatness – they aren’t there yet, but the gap gets smaller. 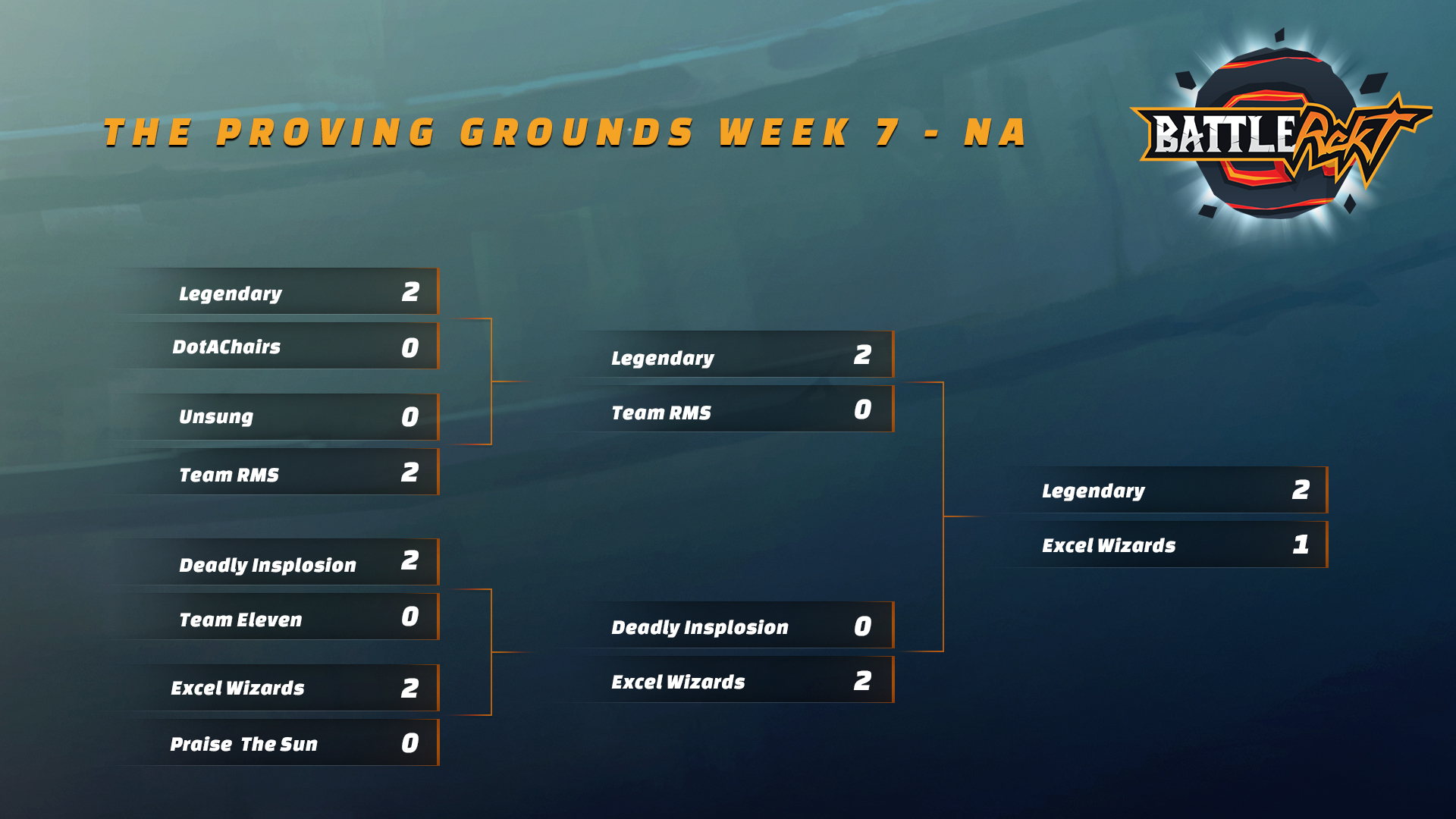 Think you have Legendary figured out? Then don’t build an igloo at Central Park, but rather sign up for the eighth week of Battlerekt. The Proving Grounds are waiting eagerly for your team. Show up to play, give the pros a run for their money and maybe even grab “their” money. 500 bucks and a whole lot of bragging rights are waiting for you.