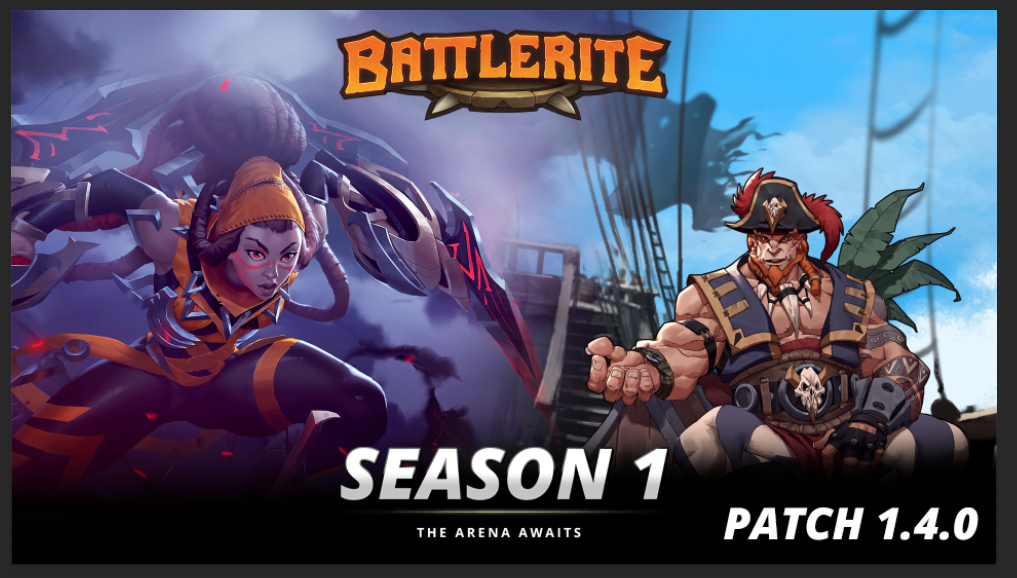 The Pre-Season is finally over and Season 1 has begun! Rankings have been reset and new rewards are here to earn. We’ve made sure there are reasons to play and login often throughout the Season, and there’s reason for everyone to participate.

Each Season will run for 2-3 months and average 10 weeks. With each new Season, Rankings and the Leaderboards will be reset. Read more about Season 1 in our February Dev Update.

The Sponsor Reward System replaces Weekly Quests and unlocks at Account Level 5. Sign a Sponsor before they become unavailable and complete daily quests to progress along the reward path. You can have up to three Sponsors in progress at a time and will be able to switch between them whenever you like, but only one “active” Sponsor will receive progress for completed dailies. Some of these rewards will be unique to their season, others will help you unlock Champions or earn in-game currency.

Some Sponsors have a League requirement, and therefore higher ranked players can get their hands on even more rewards. For Season 1 there are two League Sponsors – one requires Gold League, the other Diamond League.

We decided to expand on the current daily quest system for a few reasons. Daily quests are a natural way to gate content throughout a season. If you want to claim all rewards you will need to be active throughout the entire season; if you are a more casual player you will still be able to get your hands on high quality rewards by signing the sponsors you like and can make progress over a longer period of time.

As you can have up to three daily quests active at a time you don’t necessarily need to login every day to make progress, playing 2-3 times a week will still be enough to claim all sponsor rewards during a Season if you want to collect everything.  Besides this, sponsors allows us to tell you a bit more about the Battlerite world by presenting new characters and places as we expand on the Battlerite universe.

Once you have signed a Sponsor and have completed one Daily Quest, that Sponsor will remain in your quest log even past the Season date. This means that you will still be able to complete a reward path past the signing date, but remember that you can only have three Sponsors in progress at a time and you will need to complete at least one of them before you can sign a new Sponsor.

New Sponsors will be added each new Season and some of them will return with new rewards.

Leaderboards have been added to the game and navigated to via the “More” tab or a link on League in the Play tab. These will show the top 200 players in five Regions (North America, South America, Europe, Asia, and Oceania) for Solo Queue, 2v2, and 3v3.

Regions are determined by what servers the player or team has played on the most. Playing most of your matches on EU servers will result in you being counted as part of the Europe Region. Read more about the logic behind the Leaderboards in our February Dev Update.

The Pre-Game Lobby has been designed to improve the ability to strategically create team compositions and counter pick enemies in the League gamemode. You can find more information on the decisions and development behind the Pre-Game lobby in our February Dev Update.

We are in the progress of updating to a new Unity version to hopefully fix some crashes users are experiencing, especially crashes regarding DirectX 11. While we’re not ready to switch over to it right away we will have a public branch up on Steam.

We will try to keep this branch up to date with the live version but there is a possibility it will lag behind by a day or two.

We are making improvements to the placement algorithm to result in more accurate placement positions. The following will apply to Season 1:

Additionally, players will no longer be able to view ranking data for their opponents and teammates before or during the match. This information will still be visible once the match is finished. This change is to tackle the toxicity and unwanted match behavior resulting from referring to visible ranking data.

We are also introducing a match quality factor that will affect the rating changes for all players within a match. Matches with large differences in skills between the players and/or teams will be counted as a “low-quality” match and result in smaller rating changes for both winners and losers. Games where the balance in skill is fairly equal will have a slightly higher rating change. With this adjustment we hope to tackle the issue where some players and teams can quickly farm rating on lower skilled players and teams. We also want to reduce the frustration for players who end up with lower skilled teammates and suffering from large rating changes.

The changes to matchmaking and ranking for Season 1 will make it slightly slower to climb, reducing the huge gap in visual skill. This will also improve matchmaking and reduce the queue times.

Due to the inclusion of the new Leaderboards, Team Names are more public than ever before. The Team Leaderboard is treated very much the same as the Solo Leaderboard, and therefore Team Names will now be treated similar to Account Names. Being able to change a team name whenever a player wanted was fun, but could create confusion and toxicity with the addition of Leaderboards. For this reason, we have changed team names so they work similarly to account names.

The following rewards will be awarded to participating in the Pre-Season, corresponding to the highest League achieved:

Battlerite has a unique application kit in VR we call CamCrew. You can watch private matches in VR, but you can also work with the camera movement in full 3D and be your own “Camera Crew” in VR in the game, with the result rendered direct to video. Live or in a Replay. CamCrew will go in to public beta in the next patch, more information will come soon. 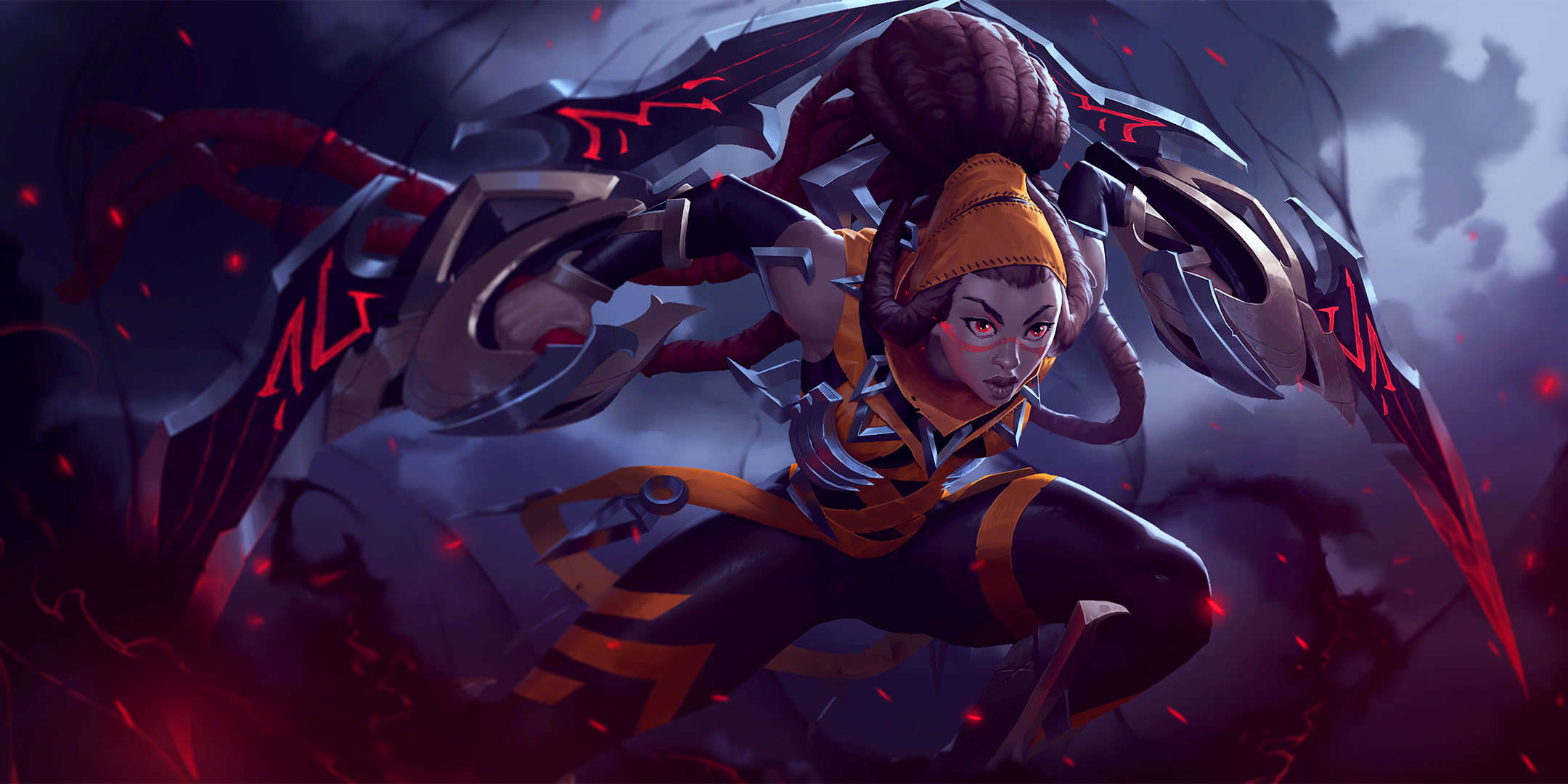 A young assassin from the Shadowblade clan, Jamila suddenly found herself the new leader after the death of her mother, the previous matriarch. As the youngest leader in the clan’s history, some call her too inexperienced and undeserving of the title. Determined to silence those detractors, Jamila enters the arena to prove her mastery of the Shadow Arts.

Three quick stabs that deal 6 damage each, followed by a heavy strike that deals 16 damage.

Hold to charge a dash for up to 0.8s to increase damage and range. It deals 8-18 damage and dashing into a wall triggers a wall jump that inflicts Incapacitate.

Counter the next melee or projectile attack. When you counter an attack, gain Immaterial for 0.5s, turn invisible, and increase your movement speed by 35% for 2.5s. Your next Assassin’s Cut while invisible becomes Shadow Slice, dealing 14 damage and inflicting Phantom Cut.

Launch a hook that deals 6 damage and pulls you and your enemy together. You strike after colliding, dealing 8 damage. Hook Shot can be used to pull yourself to a wall.

Strike forward with both weapons. Deals 22 damage, inflicts Stun and heals yourself for 22 health on hit.

Summon a phantom that dashes forward, dealing 18 damage and stopping behind the first enemy hit. Upon arrival, it chases and strikes enemies in bursts for 18 damage up to 3 times.

Throw a small knife that deals 8 damage and inflicts Weaken. Hitting an enemy causes the knife to bounce to a nearby ally, healing them for 16 health. If there are no nearby allies, it returns to you.

With this patch, we continue our work to improve rite options across the board, allowing for more interesting choices and playstyle differentiation when building loadouts.

Ashka can generate a lot of energy quickly in the right hands, so we’re toning down his energy gain slightly and will continue to monitor his performance if he needs compensation elsewhere.

The Plasma Booster rite has proven too hard to use, as you or your allies are unlikely to use the Plasma Wall for a quick boost while your enemy or their projectiles are inside the wall. The further boost to Plasma Wall rites gives more reason to utilize Plasma Wall as a support tool.

The previous change to Ezmo’s Feedback rite gave players a new option to punish enemies who hit their shield too freely, but it proved too potent in combination with the changes to Spell Eater. Even though it consumed Ezmo’s weapon charges, it felt unfair to be hit by such a quick counterattack on a ranged harasser. We’re restoring the feel of Ezmo’s death-by-a-thousand-cuts playstyle while bringing Feedback more in line with other rites.

Since Iva’s recent changes to allow her to more reliably deal damage, she has been performing better and more often finds room in compositions. Her mobility rites allow her to weave in and out of combat on a whim however, dishing out damage without having to fear much retaliation. These changes will make taking those deep dives feel a bit more risky than before.

Jade has been a tough nut to crack for melee champions for a while now. Reducing the stun duration on Concussion Bomb makes their matchup a bit easier, while adjusting Gunslinger will make it harder for Jade to slip away with stealth.

Oldur sees some bigger changes in order to enhance his support potential, especially in 3s, while still maintaining his identity as an aggressive ranged support. His fire-and-forget playstyle is unique and we wanted to ensure his power in this niche. His Rejuvenating Sands now applies a delayed heal effect by default, while its direct heal is reduced slightly to make juggling Rejuvenate and applying Time Bombs an interesting challenge. New rites have been added to allow players to tailor him to more of a support role, although they still have access to his many existing offense rites.

Raging Bull sees a change to its functionality to allow Rook to go in and do his smashing while in Berserk and to then either continue the chase or weave back out of combat.

Ruh Kaan remains under the shadow of Thorn. He has fairly small presence before he manages to get in, so we’re bolstering some of the tools he can use from a distance to solidify his role.

The Spear wants to stick to his target to remain as effective as possible, something the Swift Feet rite greatly allows him to do but also gives him too much evasiveness. With these changes, we’re toning down that evasiveness and instead offering it on other rites instead of allowing Swift Feet to pull double duty.

Much like Oldur, Sirius sees some bigger changes to up his support potential. He will be able to heal substantially more to help his allies before going in, while keeping his offensive melee healer role. His burst potential and CC capabilities see some adjustments to counteract the improvement of his newfound support power, as players will need to decide where to dedicate the power with his rites.

Thorn very much remains a force to be reckoned with, as The Twisted Terror should be. Its trading has remained slightly overtuned however, so less uptime on Neurotoxin along with a lower max cap on Regrowth should make it less daunting to engage. Regrowth gets a small quality-of-life component, with the 3rd hit of his M1 now providing a stack of Regrowth.