Good day all! Christian here and after a short break from Dev Bloggin’, I’m back to once again share another post with you. This week we’ll talk a bit about how the Summer Mega Patch panned out, answer some questions you might have about it, and the possibilities that have opened up now that the patch is live.

The patch came with some smaller issues and bugs, which is hard to avoid with such a large update, but overall I’d say it’s been a great success. The reception has been very positive and we’ve all been extremely happy about it at the office. We poured a lot of hard work into the content and features we included and seeing you guys having a blast when you dove into the game afterwards was very satisfying.

It’s always hard to tell what the full effect of a new Champion added to the pool will be. In addition there’s also always a period of time where players need to get used to the new Champion, both in terms of playing as the new Champion and in terms of playing against the new Champion. I’ve seen varying opinions from people of various skill levels on how strong Blossom actually is. There have been claims both that she is blatantly overpowered and that she can’t really do anything, from people all across the skill spectrum. In truth she is probably somewhere in between, but we’ll give it some more time to see which end she gravitates towards. We did find that, regardless of how strong she is, her low cast times allowed for very little room to react to and read what abilities she was using, reducing the available counterplay. Even if it was technically a nerf, the change to Boom Bloom’s (E’s) cast time was primarily meant to address that fact. It also granted her an ability she could meaningfully cancel cast in order to bait things out, something she sort of lacked before. The change to Gust (R) was also to give her another opening as she could be very slippery overall. Melee attacks not being negated by Gust forces a Blossom player to put some more consideration into how they use it versus Melee Champions. Of course we’ll continue to keep a close eye on Blossom in the coming days. 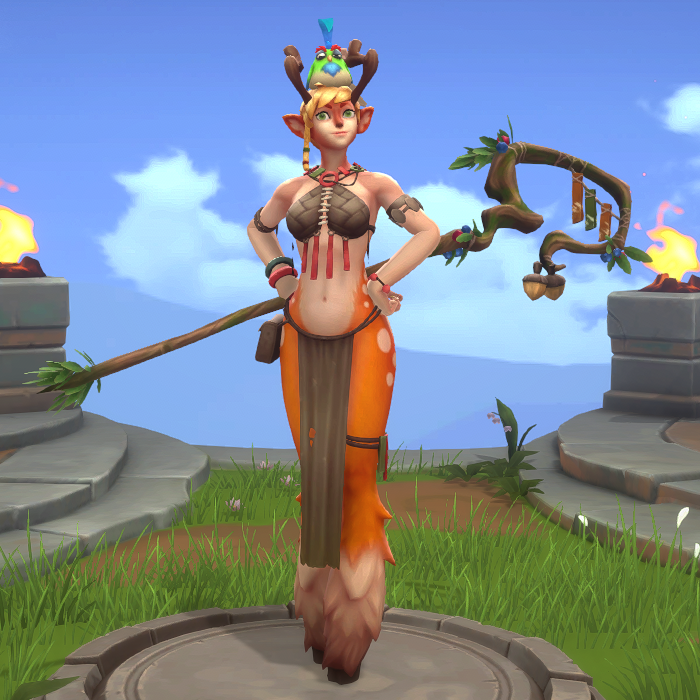 As for the rest of the balance changes, we’ve yet to see what they will eventually lead to and it will be exciting to see how the meta might change. Most of the Champions still see use at the top level. In the EU Proving Grounds’ Top 4 last week for example, we saw five out of seven Melee Champions played, with six out of seven Ranged Champions played as well. It was a lot of fun to see. Supports were more limited however, with only two out of seven being present. I’m looking forward to seeing how this week’s Battlerekt will play out.

From a more general point of view we had one of the most statistically balanced periods of Battlerite ever before the patch. With these latest changes and the addition of Blossom it will be interesting to see if that trend continues.

Rocket Balloon seems to be greatly appreciated overall and seemingly shows that more objective based game modes in Battlerite can work very well. Of course the initial reception of something like this tends to be very positive when it’s fresh and new, so we’ll be keeping a close eye on how the game mode continues to be played during the summer.

The campaign mode by itself was maybe not overly exciting for most players as it currently works as an extended tutorial, but most of the feedback I’ve seen has been positive. It teaches a lot more aspects of the game and does so at a better pace than the previous tutorial did. People also seemed to see a lot of potential in some of the challenges we present during the campaign. The negative feedback I’ve noticed basically boils down to that it is still a pretty short experience. Some felt that it could still be longer to more carefully explain other mechanics in Battlerite and allow new players more time to get used to everything. Others also felt that it was too short as they had looked forward to a fully fledged campaign to play through. Luckily the campaign was made in such a way that it supports new missions being added without too much of a hassle. We already have fun and interesting ideas on how we could expand upon the campaign to make it more worthy of that name. As with everything though, it’s a question of priority and we will probably have to wait a while before we can do more work on it. At the very least the main goal of making an improved new player experience has been fulfilled for now. 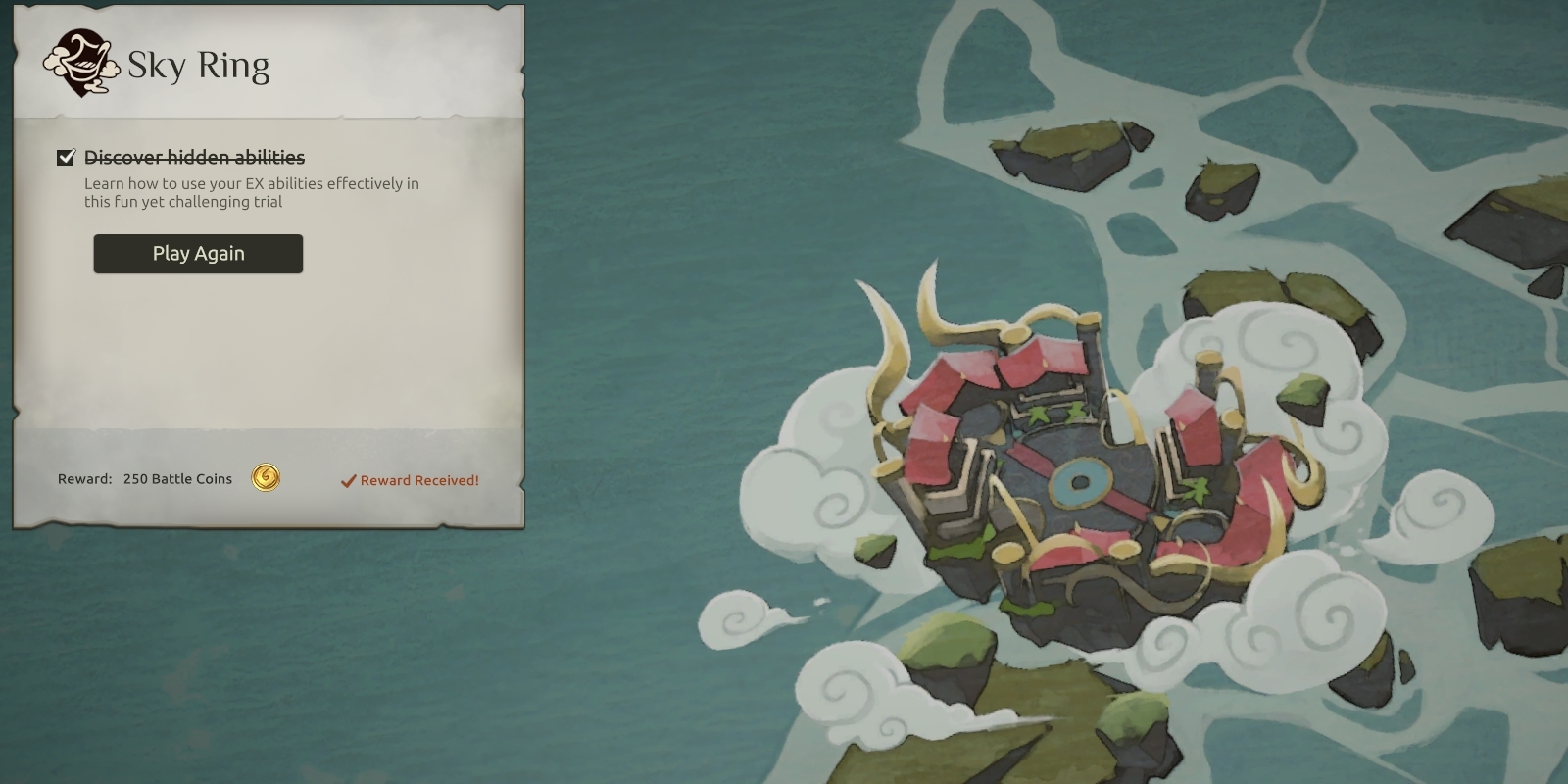 The new quest system also seems to be a big hit for most people. There’s more stuff to do in general and more reasons to return to Battlerite often. Overall we’re quite happy with how it turned out but we’d also like to let you know that this is not necessarily the quest system’s final form. As we get around to including UI 2.0 in the game, parts of it may get an overhaul, at least visually. Either way, it’s just really useful to get the system out there so you guys can give us feedback and tell us what works and doesn’t work well. 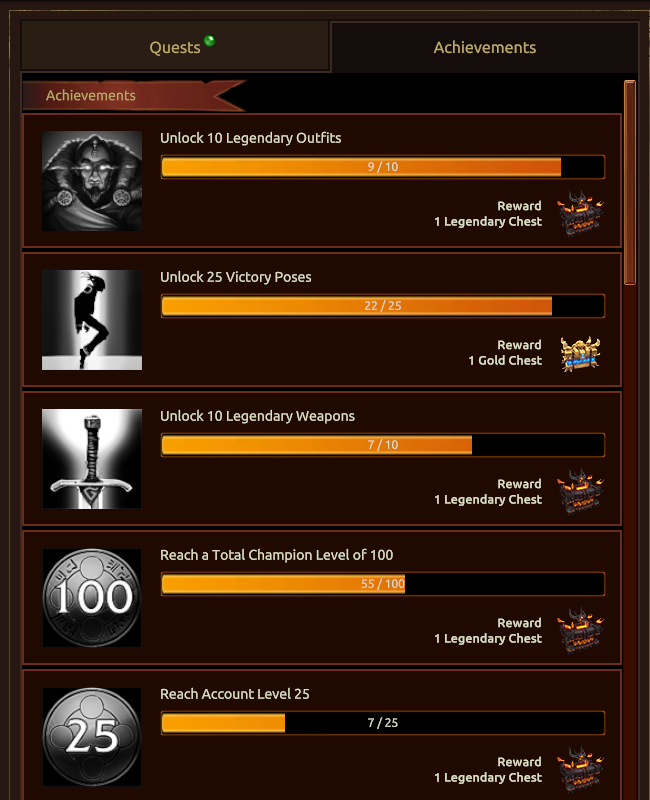 Achievements also seem to be quite appreciated, but some of our more dedicated players have expressed some disappointment around it. Having already sunk tons of hours into Battlerite they immediately completed most of the achievements available after the patch. Don’t fret though, the Achievement system, and the Quest System as a whole, is built so it can be expanded upon. The patch was in part about just getting the system into place, besides adding a lot more to quests in general. You will most likely see more Achievements added in the future, with goals even our most dedicated players will have to work on to obtain.

This is just something I’ll touch briefly upon, but the Account Levels we introduced have also seen a pretty positive reaction. To clear things up a bit, the progression here is endless, but the experience required for leveling up evens out after level 25 and remains constant for each level thereafter.

With the Summer Mega Patch we switched over from using the Steam Wallet directly for real currency purchases to the usage of Gems. As such we switched around how you get value from the larger packages you can purchase. Previously, the pricing of Gold Chests followed a pretty “linear” curve, where the amount of chests you got increased in a steady pace. You got a “discount” with each package costing less than if the price had simply been multiplied. With Gems, we’ve flipped this around. Instead the pricing follows a “linear” curve, while the amount of Gems you get instead increase as a bonus in the larger packages. So now all subsequent prices are based on the price of the smallest package. This lead to some regions getting the smaller packages for a lower price than before, but to a sharper increase in prices for larger packages. Meanwhile USD and Euro prices remained basically the same. We could have been a bit more clear that the consequences of this new system would be bigger for some regions, and we apologize for any confusion! Regardless, we’re still testing stuff out now during the time remaining in our Early Access so the pricing is not necessarily final yet.

In terms of the amount of systems and content going into the Summer Mega Patch, we definitely ended up with the biggest update we’ve done since entering Early Access. Like I said at the beginning, we poured a lot of work into it and it’s been great to see it pay off. Moving forward from this, some of the people in the office will have some time off during July. Most of the people remaining will be focusing on work for the eventual F2P release, so the pace of things will probably slow down a bit. Most likely, next week’s Dev Blog will be the last “regular” one for a while as the people regularly involved with it (including me) will be away for a bit after that. Just a heads up!

As always, thanks for reading!